Week 13 might be the most fun NFL DFS slate of the entire season, as we have a full 13-game main slate that features the return of some of the league’s best offenses in the Rams and the Chiefs, both of whom have great matchups against the Lions and Raiders putrid defenses. The running back position is also perhaps the most loaded that it has been all season with excellent options at all of the pricing tiers. Wide receiver also features a ton of great options, and there is even four or five great value options to boot there. And we all know that now DFS lineup is complete without a value pick.

I typically take a cash game approach to finding value plays, and many times you don’t need to overthink rostering value plays in tournaments, as long as you look to diversify your lineup in other areas. Be sure to check out the RotoQL Trending Players Tool to quickly identify who the top value plays are each week.

We also always caution that this article should only be the beginning of your weekly NFL DFS research. The top DFS players consult several different sources before building their lineups. The best place to start is RotoQL's NFL lineup optimizer, which of course played a major role in the picks below. RotoQL’s industry-leading fantasy football packages  are loaded with stats and easy-to-use DFS tools.

I was on the fence about what I thought about how DraftKings has priced their quarterbacks this season, but I think I’ve decided I’m all for the move to condense the pricing from the top and the bottom of the QB pricing structure. That isn’t to say that there can’t be huge value to be found at the position, and this week the guy that stands out like a sore thumb is Vikings QB Kirk Cousins, who checks in at only $5,500 on DraftKings in a great matchup with the Patriots. You can’t really call Cousins' first year in Minnesota a success or a failure at this point, but he hasn’t really flashed the upside that we expected from him going into the season. With that being said, Cousins has been dominant in games this season with totals over 48 points; posting a plus/minus of plus-8.8 and averaging over 27 DK points in four games. This week, Cousins will likely be tasked with putting up enough points against a Patriots team that comes in as a 5-point home favorite, but also struggles against opposing passing games, ranking 25th DvP against quarterbacks.

The running back position is by far the most loaded it’s been all season long. For cash, games I’m leaning toward jamming in three high-usage backs into my lineup. Up at the top you have plenty of great options, many of whom are underpriced in my opinion, but perhaps the most underpriced running back given the matchup is Broncos rookie RB Phillip Lindsay against the Bengals. Cincinnati's defense is crumbling before our eyes and is currently both the worst scoring defense and worst defense in term of yards allowed in the league. They’ve been gashed by running back after running back the last few weeks and rank 30th DvP against the position. Lindsay has taken the Broncos backfield by storm, and firmly established himself as the lead back ahead of both Royce Freeman and Devontae Booker. Lindsay has exceeded 14 touches in seven of the last eight games and ripping off over 7.0 yards per carry in each of the last two games. From a fantasy perspective, Lindsay has been as safe as they come, exceeding value in four of the last five games, and his only ‘dud’ game of the season came in Week 3 against the Ravens when he was ejected from the game.

With so many good options at running back this week, we’ll need to find some value at the wide receiver position and thankfully, there are numerous decent option below $5,000 on DraftKings. Let’s start in Tampa Bay, where injuries to O.J. Howard and DeSean Jackson have opened up more opportunities for guys like Adam Humphries, Chris Godwin, and Cameron Brate. Of the trio, I like Humphries best for cash games in the Bucs high-totaled matchup with the Panthers, but also will look to sprinkle in Godwin if Jackson sits out with his hand injury. Humphries has been incredibly consistent for the Bucs out of the slot this season, posting a plus/minus of plus-6.1 over the last eight weeks with an 88 percent consistency rating. Humphries is also seeing consistent volume for a player priced under $4,500, with five or more targets in six of the last eight games.  This an excellent opportunity to buy in on the Bucs high volume passing game that has allowed Jameis Winston to throw over 35 attempts in all of his starts this season and has three pieces priced $4,200 or less on DK.

While I expect Adam Humphries to be a popular option as a value wide receiver this week, the most popular play perhaps on the entire slate may be Lions slot WR Bruce Ellington. The Lions receiving core basically only consists of Kenny Golladay, Theo Riddick, and Ellington at this point following the departure Golden Tate and a season-ending injury to Marvin Jones. Ellington has seen volume that you typically don’t see players in this price range get, with 17 targets over the last two weeks. I don’t expect that volume to go anywhere this week, as the Lions face the Rams as 10-point home underdogs. Expect Matthew Stafford to throw upwards of 40 times in this game as the Lions will likely be trailing deep into the game and may still be without RB Kerryon Johnson. Ellington is the first name I’m plugging into my cash game lineups and while fading the chalky cheap wide receivers in tournaments is usually a smart play, it’s going to be hard to overlook locking in Ellington’s six-plus targets at such a cheap price.

Welcome to Eric Ebron MEGACHALK week. Following the season ending injury to fellow TE Jack Doyle, it’s going to be up to Ebron to shoulder the main pass catching tight end role for the Colts. Ebron has traditionally been a player that we liked to pick on during his time with the Lions, but a move to Indianapolis and quarterback change to Andrew Luck has brought out the best in the former first round pick. Ebron not only has double-digit target upside without Doyle, but also has huge touchdown upside, as he’s put up an incredible 11 scores thus far this season. The tight end position is really the only weak spot in the Jags defense, as they rank only 18th in DvP against the position. Ebron would be a great play even if he was priced $1,000 more on both DK and FD, but he is a smash play at his current price point of only $4,200 and $5,600. 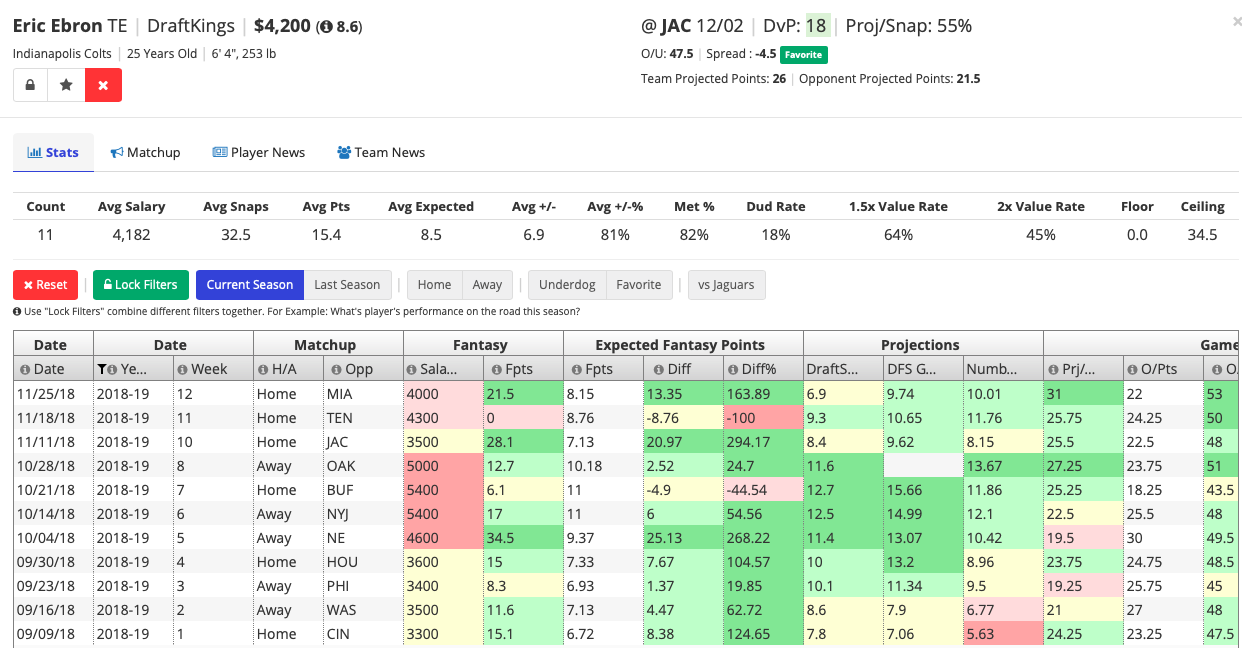