With a heavy heart, Royals rookie Yordano Ventura is brilliant

KANSAS CITY, Mo. — Yordano Ventura has amazed his teammates all season, with a blazing fastball that regularly hits triple digits on the radar gun and poise beyond his 23 years.

But his performance Tuesday night in Game 6 of the World Series was something his fellow Royals will never forget. Not only did Ventura have the standard down-a-game-in-the-World Series pressure — a weight that’s crushed many veterans — but his heart was heavy.

Ventura’s friend, Cardinals rookie Oscar Taveras, was killed in a car wreck on Sunday in the country where they both grew up and learned to play baseball at an exceptional level.

Carrying everything on his shoulders, with Taveras’ initials and uniform number written on his cap, Ventura was brilliant.

“Tonight was special,” Royals third baseman Mike Moustakas said. “He pitched with his heart on his sleeve, going through a lot of stuff emotionally, and to go out there and throw the ball the way he did, everyone in this clubhouse is stoked and proud of him. That was just a phenomenal performance.”

On paper, Ventura pitched seven shutout innings, allowing just three hits while striking out four Giants in a 10-0 Royals victory. He did walk five batters, but he kept San Francisco off the scoreboard for 100 brilliant pitches. All while thinking of his friend.

“From the minute that I found out about Oscar, I said this game was going to be dedicated to him,” Ventura said through teammate Christian Colon, who served as his interpreter in the postgame press conference. “I prepared myself mentally and physically for this game, and I'm very proud to be a Dominican, and that's why I brought the (Dominican) flag (to the interview room).” 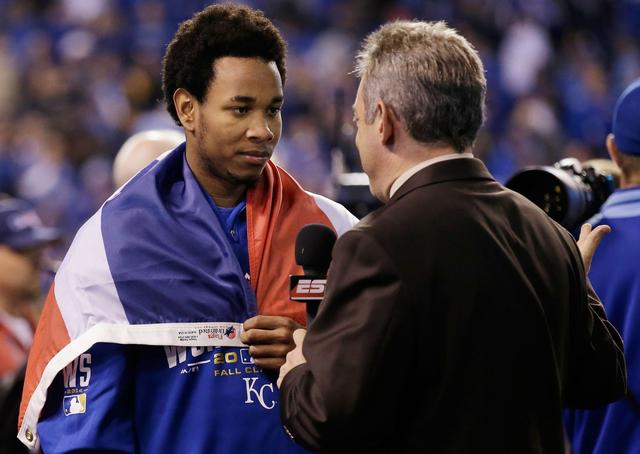 How special was his performance? After the game, the Baseball Hall of Fame asked for his cap, and it will have a place of honor as one of the game’s great performances.

And the cap absolutely belongs in baseball’s sacred spot.

“I mean, you’ve got a 23-year-old kid pitching the biggest game that this stadium has seen in 29 years with our backs against the wall and he goes out there in complete command of his emotions with great stuff and throws seven shutout innings,” Royals manager Ned Yost said. “I mean, we’ve talked all along about how special he is, but this just shows, you can’t be on a bigger stage than he was tonight. To perform the way he did was just special.”

And it won’t ever be forgotten, especially in Cooperstown.