Pitchers playing the field: A position-by-position look at last time it happened

It's always good for a smile when a position player takes the mound for a major league team, something that already has happened a dozen times this year. It's happening so much, it's almost an element of long-term strategy, allowing managers to save some innings from actual relief pitchers in blowout games.

Far less common is the reverse — a pitcher playing any other position on the field. Even that, though, has seen an uptick this year, with Andrew Cashner playing left field for the Padres in an extra-inning game in April, and Tony Sipp spending a little time in right field for the Astros on Monday. If you want some real rarity, wait for the next time a pitcher steps behind the plate — that hasn't happened since 1942!

Ryba did not make his major league debut until he was 32 years old, coming up as a pitcher with the 1935 Cardinals. The next year, he pitched 14 games for St. Louis, and caught four. By the time his career was over in 1946, Ryba made 10 appearances behind the plate, including five starts, to go along with 240 games on the mound for the Cardinals and Red Sox. It was with Boston in 1942 that Ryba became the last pitcher to catch a game — Joe Cronin gave him the start in the first game of a July 26 doubleheader against the St. Louis Browns, keeping regular starter Bill Conroy fresh for the second game. Since then, one pitcher has gotten credit for an appearance as a catcher — on June 29, 1961, Phillies manager Gene Mauch put Chris Short in the lineup as his starting catcher, with pitcher Don Ferrarese in center field, and Jim Owens in right field. It was all a ruse to confuse the Giants about who the actual starting pitcher would be, and all three pitchers were replaced by real fielders at the start of the game, leaving Ken Lehman to start on the mound. Lehman gave up a walk and a single, then was replaced himself by Dallas Green, while in the bottom of the first Giants manager Alvin Dark pulled starter Billy O'Dell after a leadoff single, ging with Sam Jones. Only twice since that game have both starting pitchers failed to record a single out.

The second game in the history of SkyDome, on June 6, 1989, had its own bit of history, as Crim became the last pitcher to play first base for more than a quarter century, something nobody could have known at the time, given that Fernando Valenezuela had played first base for the Dodgers in a 22-inning game in Houston, three days earlier. Crim's deployment was more strategic than Valenzuela's, which came out of necessity in a marathon game. With the Brewers up, 6-3, in the ninth inning, Crim got himself in some trouble, loading the bases with one out on a double by Fred McGriff, a single by Rance Mulliniks and a walk to Ernie Whitt, worked around a strikeout of Lloyd Moseby. With Nelson Liriano at the plate, Brewers manager Tom Treblehorn called on Tony Fossas to pitch, and put Crim at first base, replacing Greg Brock, while sacrificing Robin Yount as the DH. Fossas gave up an RBI single to Liriano, so Crim came back to the mound, and Terry Francona went to first base. A flyout by Tom Lawless and a strikeout by Tony Fernandez gave Crim the save. 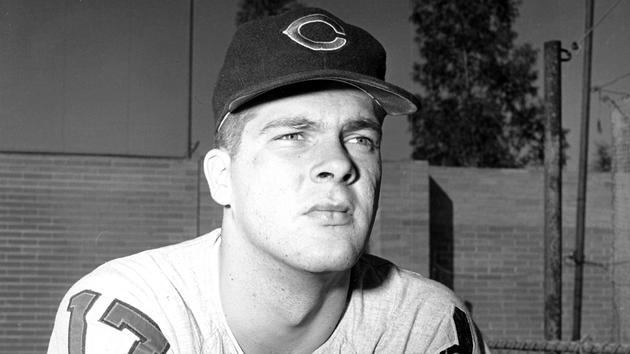 McDowell was pitching himself a pretty interesting game for the Indians on July 6, 1970. In 7 2/3 innings against the Washington Senators, he had 12 strikeouts, but had given up four runs on 11 hits and five walks. With the tying runs on second and third, Alvin Dark moved McDowell to second base and called on Dean Chance to face Frank Howard, who was 2-for-2 with a pair of walks already. Chance issued an intentional walk, then got Rick Reichardt, who had been 2-for-4 against McDowell, to ground out. McDowell returned to the mound for the ninth inning and struck out the side in order, finishing one of the strangest 15-strikeout performances ever.

The Pirates wound up being world champions in 1971, so it took whatever a manager could muster to beat them. For Frank Lucchesi, that meant an unorthodox move on August 6 at Three Rivers Stadium, where a two-run homer by Willie Montanez off Dock Ellis had given Philadelphia a 3-2 lead in the eighth inning. Bill Wilson already was in the game pitching, and he got Roberto Clemente to ground out to begin the bottom of the eighth. With lefty slugger Willie Stargell coming up, Lucchesi called to the bullpen for southpaw Joe Hoerner, and moved Wilson to third base, replacing Terry Harmon. Hoerner got the strikeout, and Wilson returned to the mound, with Bobby Pfeil going in at third base. Wilson got Manny Sanguillen to ground out, then pitched around a single and a walk in the ninth inning to close out the game.

Indians starter Jack Salveson gave up four runs in one-third of an inning on June 12, 1943 against the St. Louis Browns, leading manager Lou Boudreau to empty his bench in a game that Cleveland trailed 4-0, 5-2, and 6-5 before tying things up in the bottom of the ninth. Boudreau's juggling included moving himself from shortstop to catcher, and putting in Bagby, an All-Star who led the American League in innings pitched that year, at shortstop. Bagby got an assist on his only chance in the field, but the Indians succumbed, 7-6, in 11 innings. Technically, Johnny O'Brien was the last player who was primarily a pitcher to appear at shortstop, as he pitched 16 games for the 1957 Pirates, while playing eight games at short and two at second base, but in his career, O'Brien was really a second baseman, with 248 games at that position, 15 at shortstop and 25 appearances on the mound.

On April 25 of this year, the Padres' bench was nearly empty in the 11th inning against the Nationals, and Bud Black wanted right-hander Tim Stauffer to face Jayson Werth before bringing Alex Torres in from the bullpen. So, for Werth's at-bat, Cashner moved to left field and Stauffer got the lineout he wanted. Black then made his double switch, putting Alex Torres on the mound and Tommy Medica in left field. The Padres scored in the top of the 12th, and Huston Street closed out the game before it could get any weirder. Before Cashner, the last pitcher to see time in left field was Roy Oswalt of the Phillies, in a 16-inning game against the Astros, following Kyle Lohse of the Cardinals in a 20-inning contest against the Mets earlier that year. 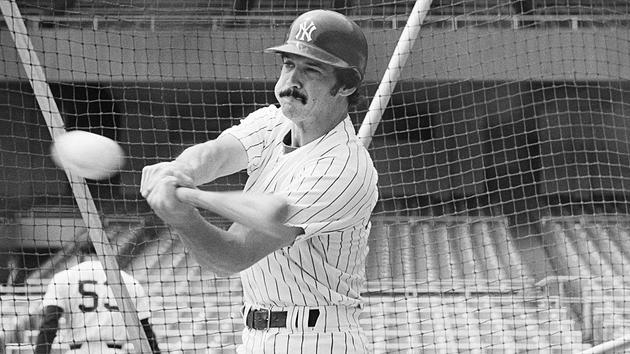 Guidry's appearance in center field, much like Don Mattingly's appearance at second base on Aug. 18, 1983, was meant to make a mockery of the game, as Billy Martin and the Yankees were incensed over George Brett's ejection for pine tar being overturned and what wound up being the game-winning home run allowed to stand. Guidry did not have to do any work, as George Frazier struck out Hal McRae, and Oscar Gamble pinch-hit for him, grounding out to end the game. Martin also gave Guidry an inning in center field late in the 1979 season at the end of a blowout game, something Martin also did on the last day of the 1982 season for the 94-loss A's, as he had pitcher Rick Langford play one inning in center field and two in left — it was in left field that Langford recorded his one outfield putout.

Monday night marked the third time in four years that the Astros used a pitcher in right field, following Wesley Wright's appearances there in 2011 and 2012. Sipp pitched the seventh inning against the Diamondbacks, and after he struck out Gerardo Parra to start the bottom of the eighth, manager Bo Porter wanted right-hander Jerome Williams to pitch to Paul Goldschmidt. Following a five-pitch walk, Sipp returned to the mound to strike out Miguel Montero, with Kyle Farnsworth fanning Martin Prado to end the frame en route to a 4-3 Houston victory. (Previously: Wesley Wright, 2011 and 2012 Astros)