A weekly breakdown of the games that will shape the path to the College Football Playoff:

LSU and Wisconsin both averaged more than 200 yards rushing per game last season.

For LSU, it's a chance to continue a ridiculous win streak that doesn't get enough national attention. LSU has won 45 straight regular season nonconference games, and Les Miles is 35-0 since taking over in 2005.

That's not going to scare Wisconsin, which is 34-2 in nonconference regular-season games in the same stretch. It's a chance for second-year coach Gary Andersen to make a statement for the Big Ten.  Melvin Gordon — he averaged 7.8 yards per carry last season — can launch a Heisman campaign if he leads the Badgers to victory.

The loser digs an early hole for the race for the four-team College Football Playoff.

TAKE FROM THE PRESS BOX

"LSU in the last decade or so has had tremendous success at a national level. Les Miles has (had seven) 10-win seasons in the last decade. They are armed and ready to go. It's a real thrill for the players, and it's a real thrill for Tiger nation to play in these neutral site games. The trips to Dallas have been successful, and Houston is just a full hour drive from here. Reliant Stadium is a trip they are very much looking forward to, and they're already looking forward to the return game against Wisconsin at Lambeau Field in 2016. These are special things." — Jim Hawthorne, LSU Radio play-by-play announcer, also known as "The Voice of the Tigers."

“LSU opened as a 7-point favorite over Wisconsin on the Golden Nugget’s Games of the Year board.  Wisconsin is traditionally tough as an underdog, going 8-4-1 against the spread when getting points since 2009. LSU, meanwhile, has covered just nine of 23 spreads as a favorite over the last two seasons.” 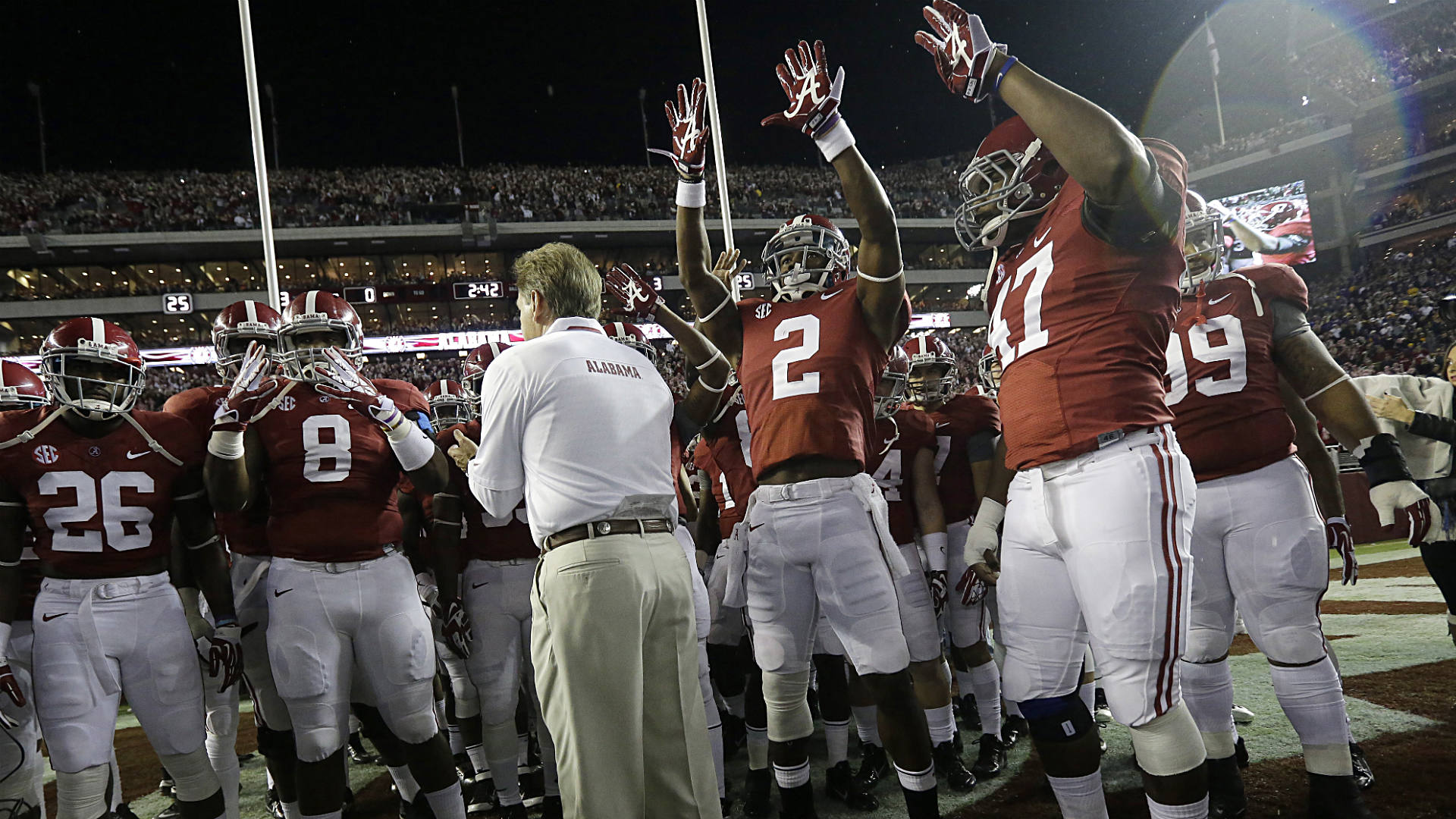 Alabama has a history of dismantling teams on neutral fields in openers. (AP Photo)

The Crimson Tide will open the 2014 season on neutral ground for the fifth time under Nick Saban, and they'll be facing his native state West Virginia in Atlanta. That's a tough order for the Mountaineers considering Saban's track record in those neutral-site openers:

Arkansas at Auburn: Gus Malzahn and Bret Bielema are playing nice after all the verbal spars last season, and Bielema could help himself a lot by picking up his first SEC win. It will be entertaining if things like this keep happening …

Clemson at Georgia: Both teams break in new quarterbacks. Clemson's Cole Stoudt and Georgia's Hutson Mason will be the story here. The Bulldogs are 15-2 against the ACC under Richt, and the lone loss in Athens came in 2008 against Georgia Tech.

Florida State vs. Oklahoma State (Arlington): While the focus will be on Heisman Trophy winner Jameis Winston, this game might mean more for Oklahoma State coach Mike Gundy. He's 3-8 against top-five teams, though the last matchup was a convincing 49-17 win against No. 3 Baylor in 2013.

There will be multiple forms of that tweet leading up to and into the rematch between Appalachian State and Michigan. Every Michigan fan knows what happened last time:

If the Mountaineers take a lead — any lead — early against Michigan, expect #AppState to trend on Twitter. Our advice for Brady Hoke: Take the ball if you win the toss.

In 1983, Miami lost 28-3 to No. 16 Florida in the season opener. The Hurricanes rebounded to go 11-1, beat No. 1 Nebraska in the Orange Bowl and won the program's first national championship.

Plan to stay up late for the Thursday doubleheader (Texas A&M at South Carolina, Boise State at Ole Miss) and get up early Saturday for the 8:30 a.m. ET kickoff between Penn State and UCF in Dublin, Ireland. Take time on Labor Day to watch Louisville make its ACC debut against Miami. The Cardinals trounced the Hurricanes 36-9 in last year's Russell Athletic Bowl.